Earlier this year I was asked to become a patron for Anna Kennedy Online, a charity promoting autism awareness and supporting those affected by autism.  I do not take this role lightly, in fact I see it as a responsibility just as I see the success I have had within my sport - I have a responsibility to encourage others, share my success, my stories in the hope they may help someone.  I remember vividly how I felt in my younger years and I want to be a role model to people who are struggling with confidence issues - believe in yourself because you are capable of more than you know.  So when Anna asked me to write something for anti-bullying I dropped everything to give this my full attention.

And here is the outcome,  can also be seen on Anna Kennedy Online website.

"Most people would walk straight past me in the street and never imagine that I am a three times kickboxing world champion, just like they would never guess I have Asperger’s Syndrome.  In fact upon meeting with people I used to go school with – fellow pupils and old teachers – it seems that I would be the last person any of them would have picked to have achieved what I have.  At school I was withdrawn, extremely quiet, very anxious with low self esteem and no confidence to speak of whatsoever.

I grew up without a diagnosis and not really understanding why I felt so different, but in this case this is beside the point.  I grew up being made fun of, excluded, called names, taunted, pushed around, taken advantage of and it didn’t stop once I became an adult.  As an adult I was ostracised in the workplace, I had my privacy invaded and was emotionally bullied.  I was bullied at school and in the workplace because of my appearance, my sexuality and because I was different in how I acted and reacted to things.  Some of the bullying I experienced I did not realise was classed as bullying at the time and some of it was more obvious.  Being on the autism spectrum can sometimes make it difficult to recognise when the way you are being treated is wrong.

Bullying does not have to be physical, you don’t need to be hurt physically or beaten up regularly, spat at or the target of flying objects or a quick shove over.  Bullying takes on many different forms in both a direct and indirect way.  It can be as obvious as somebody calling you abusive names, taunting or insulting you persistently over things such as appearance, intellect, disability, sexuality, ethnicity, beliefs; or as a subtle as someone creating false rumours about you or purposefully excluding you from being part of an activity.  It can be carried out by one person or a group of people but the general aim is to establish a power over you, to make you feel inferior, vulnerable and maybe manipulate you into doing things you wouldn’t otherwise willingly choose to do.

I hated myself when I was younger, I felt lonely and I believed that I was no good to anybody and that I would never achieve anything.  There were even people who laughed at me when I started kickboxing, who told me I would never be any good at kickboxing – how wrong were they?!  I tried to stay in the background and avoid attention but I was not made to be in the background – just as any other person I was made to live a life that I chose.  And I chose kickboxing.  At 13 years old, when I was at school and bullied, I decided I was going to be a world champion, I was going to be the best.  And it was my focus on this that helped me get through the tough years I had as a teenager.  Things turned out well for me in the end but it was excruciatingly painful and you can’t take that chance.  You shouldn’t have to suffer in silence like I did.

If you are being bullied, if somebody is treating you in any way that causes you hurt and distress or even if you think some of the things you might be being asked to do seem strange and different it is so important that you tell somebody in authority like a teacher, your manager, your parents.  I know as a person on the autism spectrum that this can be difficult, I know that it is hard sometimes to approach anybody, let alone somebody with authority.  You don’t have to approach them directly face to face, you can ask somebody you trust like a friend to help you or you could even write a note.  But it is important you tell somebody because they can help it stop and keep you safeguarded.  Nobody deserves to be bullied or treated badly, for whatever reason.  We are all worthy of being treated with love, dignity and respect just for being who we are.  Different is not less."

Over the last month Facebook discovered Bitstrips, an app which allows you to create cartoons of you and your friends.  I have used Bitstrips (and this took me hours) to put together a comic about Autism and Asperger's Syndrome.  It was difficult to cover every characteristic without doing too much but I hope that I have found a good balance.  Anna Kennedy initially asked if I could do an anti-bullying cartoon for her 'Give Us A Break' campaign but the general awareness one seemed to take over as I realised how these cartoon images could really help to depict some of the challenges and characteristics of Autism and Asperger's.  This comic is now going to print but can be viewed in an album on Facebook, just check out the link below. 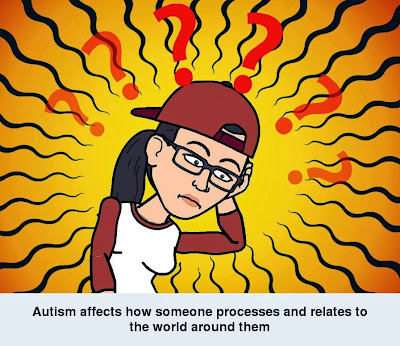